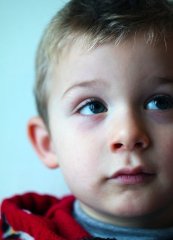 Craig came from a home with extreme domestic violence, suffering severe neglect and emotional abuse. There had been a placental abruption during pregnancy and he was back in hospital with breathing difficulties within a month of being born, so there is a possibility that he suffered a bleed on the brain, making life even harder for this little boy. He was one of the most challenging children we’ve had when he attended his first workshop. Now – we all have a huge place in our hearts for him.

In the care of his loving adoptive parents his progress has been remarkable, and the compassion and insight this little boy now shows is incredible considering he suffered so much neglect and has had so many battles.

He began attending our workshops in 2018. During one of our visits to the Five Sisters Zoo for our ‘Meet the Bears’ workshop, Craig was particularly moved by the story of two newly rescued bears Henk and Eso, a brother and sister who were only around 4 years old when they were rescued from a barren cage outside a restaurant in Albania, captured as part of the tourist trade. Craig learned how the bears were never fed, were given beer to subdue them, and the only water they had to drink was rainwater gathering in puddles in the cage. Although he was six, Craig couldn’t read at that point and had to have the bears’ story explained to him. While looking at the ‘before’ and ‘after’ pictures of Henk and Eso he went quiet and asked if he could stay behind with the keepers and the bears. Then it came spilling out all about how the bears’ story was just like his – how his first family, about whom he had never spoken to strangers before, had never fed him either and that, like the bears, he’d never had a safe place. It’s even thought that Craig was over-medicated on Calpol to subdue him. Then, heartbreakingly, he asked the keepers if the bears got hit when they were naughty – clearly relating his story to that of the bears and developing a deep compassion and empathy for the animals through shared experience.

We have stayed in close touch with Craig and his mum and recently they came into our office Woodland Haven room for some one-to-one work. During that time, Craig made up a special goody box of treats and toys for a doggy at a shelter looking for his forever home. He took great care making up the box and then firmly announced that it had to go to a dog that ‘needed’ it, not just ‘wanted’ it – an amazing distinction between wants and needs for a little boy who had been through so much. He was adamant about this so we were determined to show him that adults can keep their promises and that his feelings mattered. After speaking with our colleague and the Edinburgh Dog and Cat Home and explaining the situation, they picked the perfect little doggy – Jock – to get Craig’s box. They explained that Jock definitely ‘needed’ the box as he had come to the home a few months earlier with a very large lump on his neck, most likely caused by trauma and infection. The home decided to operate on Jock to remove the lump and Craig’s box was the perfect gift to cheer Jock up as he recuperated.

When we went back to Craig and his mum to update them on his box going to a doggy that really needed it, and that Jock had recently had a lump removed from his neck, Craig’s mum informed us that Craig himself was currently having investigations on a lump in his neck, most likely as a result of earlier trauma.

What were the chances?!

On another occasion we spent some more time with Craig and his mum and asked him for some help with our new Animal Heroes workshop and ideas for Random Acts of Kindness – an activity we were going to include in the workshop to encourage the children to show compassion and kindness to others.

We made up a sheet with suggestions for Random Acts of Kindness and read all these ideas to Craig. He loved them all but when it came to the most important one of all – the one in the middle that said ‘Be kind to yourself’ – a puzzled look came over his face and he said “I can’t be kind to myself because that’s selfish.” Maybe that’s something we could all learn from Craig. Many of us have forgotten how to be kind to ourselves and have some self-compassion without feeling guilty or selfish and we should encourage that in all children. After all, how can we show kindness and compassion to others if we can’t show it to ourselves first.

It has been and continues to be a pleasure to work with Craig and play a small part in his recovery from a highly traumatic start in life. We are learning as much from him as he is from us. 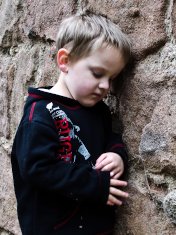 Oliver was one of the first children to be referred to our programme and was around 9 years old at the time, in long-term foster care with his sister.

Oliver was talking like a toddler when he was placed in foster care and had never used cutlery. He’d not had any speech therapy and didn’t have friends as only his sister could understand what he was saying. He had nightmares of people breaking in and stealing him away, and used to check that the door was locked and the chain on before bed so that the “bad people” wouldn’t get in. He wet the bed and didn’t trust anyone. His foster mum had to learn to cut his hair since he was terrified of hairdressers as he thought they would cut him. Oliver had no expectation of anything good. He was always geared for disappointment. He has scars and has no memory of how he got them. His back is especially bad.

When living with their birth mum, Oliver and his sister used to be bought kittens. The mother would wait until they were attached to the animal, then give it away. This happened on a number of occasions and the children eventually stopped naming the animals and developed a worrying indifference towards them. There was a little cat living with their new foster family and it took them months to realise she was staying for good.

Oliver was very withdrawn when he first attended our activities.

One of our workshops is called ‘Hollydays’. During this workshop the children learn the story of a rescued labrador Holly who suffered neglect and ill treatment and lived in four or five homes before finding her forever home where she was loved and thrived. The children relate to Holly’s story and part of our activities during the workshop includes the children making up boxes of treats and toys to donate to dog shelters for animals who are still waiting for new homes.

Oliver attended our ‘Hollydays’ workshop and became very taken by Holly’s story. He learned how Holly’s favourite place was getting up on the couch to cuddle in with her owner. However Holly began to struggle with arthritis as she was getting older but was still determined to get up onto her beloved favourite spot on the couch.

The little child became aware of Holly’s plight and one weekend his foster mum noticed he was engrossed in building something with his Lego. After studiously building a little set of Lego steps, the child handed them to his Foster Mum and said ‘they’re for Holly – to help her up on the couch.’

Sadly Holly passed away a few years later, but Oliver was still involved in our Fostering Compassion activities. One day we were attending our ‘Be a Vet for the Day’ workshop and he spotted Holly’s noseprints against the window that her owner hadn’t had the heart to wash off yet. He gently placed his cheek up against the window and said ‘I’m hugging Holly.’ Also shortly after her death, a book was written and published about Holly and featured in the local paper. Oliver’s foster mum got this paper and he spotted the article and ran up to the window and pressed the paper up against the window pane. His foster mum asked him what he was doing and Oliver proclaimed ‘I’m showing the paper to Holly in Heaven.’

Oliver and his sister drew lovely pictures of Holly by a rainbow with animal angels to help her. The pictures said ‘Good Luck Holly’ and were full of colour, when previously the children had always drawn dark and gloomy pictures. 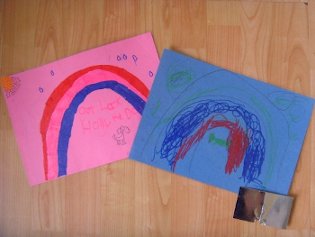 Due to the fact that the children benefiting from the Fostering Compassion project are all vulnerable and at risk children, models have been used for all photos on this site and all names have been changed.