The first child we decided to help had been neglected in every way imaginable by their birth parents. Cruelly, the child was bought pets in order for the parents to ‘buy’ the child’s affection. Once the child became attached to the pet, the pet was got rid of, causing the child great distress. This would happen repeatedly and as a result, the little child began to develop a worrying indifference to animals.

Holly, the Winton Bear Foundation’s much loved canine ‘Head of Sponsored Walkies’, took part in many of the Bear Foundation’s fundraising events. Holly herself was subjected to neglect and ill-treatment in her earlier years before she came to live in her new home. Sadly in June 2012 she became very ill. Holly loved getting on the couch to cuddle in with her owner but while she was ill, very much struggled to get up onto her beloved favourite spot on the sofa.

The little child became aware of Holly’s plight and one weekend his Foster Mum noticed he was engrossed in building something with his Lego. Then, after studiously building a little set of Lego steps, the child handed them to his Foster Mum and said ‘they’re for Holly – to help her get up on the couch.’

It was an incredibly touching gesture of compassion and empathy from a damaged little child to a dog he’d never met. So Holly put paw to paper and wrote a little letter back…

It’s Holly! Do you like my writing? It’s quite good isn’t it? I’m a very clever dog.

Your new mummy told me that you had been very kind and thoughtful and made me some Lego steps to help me up on the couch and into the car when my legs hurt. You are so kind and it makes me very happy that you helped me. Thank you! 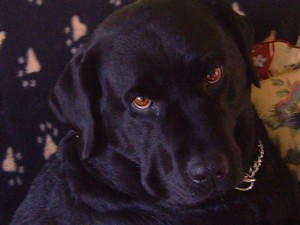 When I lived in my old home, I wasn’t looked after very well and I was sad a lot. But now I live with my new mummy Lesley and I’m really happy. I get lots of cuddles and if I’m really good, I even get some doggy chocolate, yum! Yum!

Do you get chocolate when you’re good?

I really hope I can see you soon for cuddles.

Lots of love and woofs.